David Ayres was sitting by himself in the bowels of Scotiabank Arena when he got word Hurricanes goalie James Reimer had suffered an injury.The on-call emergency netminder for Saturday’s game in Toronto, Ayers got half-dressed into his gear on the off chance something might happen to Carolina’s second option, Petr Mrazek.

Congratulations to all involved! It’s not easy to build a highway BEFORE the people come – but it’s much easier and makes more sense. Look at the proposed 413 – will cost much more to build and take longer due to build up already in area. For all those that want everything for free – get used to it. Gas taxes haven’t gone up in years so user pay will be the new normal. Waiting for the 401 congestion tolls to start. Just wait.

Getting around Durham will get easier on Monday.The provincial government has announced the final stretch of Highway 407 and the entire Highway 418 will open on Dec. 9.The 407 extension adds 14.2 kilometres, while the 418 is 10 kilometres and connects the extension of the 407 with Highway 401.”The completion of the Highway 407 East project will connect communities and greatly improve our transportation network in this region,” said Vijay Thanigasalam, parliamentary assistant to the minister of t

Always put your comments on your own space.

Here’s mine in response to this article Ask Us: Why is the 407 so expensive? | DurhamRegion.com published today.

So much disinfo.
The 407‘s OPERATION was auctioned off. Any corporation could have bid on it, and only one won it – as with all auctions. It went to the highest bidder. Since no one was sure about how things would turn out (and whether or not the government or next government would break the contract – as it can – since it passes the laws), the price settled was the fair, market price. Today the lease is worth more, since we now have 22 years of history, important for any investment valuation.
You and the Queen own the highway. We lease its operation.
Why? Because if the money was placed into general revenue, as are most tolls and taxes, it would be (mis)allocated to any political priority of the day.
Do you want a new MRI machine or a new lane? Clearly, the MRI machine would win.
The 407 lease holder cannot buy a new MRI machine, only install a new lane.
Secondly, part of the contract was to keep the highway moving – at a reasonable and justifiable cost – and use cost as the primary tool to keep it from gridlocking or even slowing down considerably. Did you know the busiest sections – and they are many “zones”, are tolled differently as some are in areas that can become super congested?
Rush hour proves the cost is accepted by a large number of people. They are willing to pay to keep moving.
If the government OPERATED it (remember, we own it), they may cave to the whiners who don’t want to pay the market price to avoid sitting in gridlock and reduce the tolls. Say they did it by 50%. What do you think would happen to the traffic? All for a few votes would your headache commute start again.
Did you know that if you sit in traffic on the 407 for an unreasonable amount of time you can ask for a credit on the toll?
In closing, ALL freeways, and possibly secondary roads, will be tolled, at minimal friction (thanks to technology) in the future. The real cost of maintenance is subsidized by other taxes and NOT paid by road users. We accept this as fair and convenient, which is fine. It’s also why the 401 is falling apart, full of unfilled potholes, and rarely expanded at a reasonable pace to keep up with volume. By contrast, the 407 has been widened, RECONSTRUCTED with concrete, and had more sections LED lit over its lifetime than any part of the corresponding 401. This is the future, unless you want $2/L gas, with more than half of that tax. No? Didn’t think so.
Oh, and one more thing. If you pay into the CPP (your pension), be happy that your money owns (I believe) a controlling share in the leasehold corporation. If you’re an Ontario government retiree, your pension plan owns 10%. So your guaranteed pension just became that much more safe.
My only gripe is the lease was 99 years. It should have been 10 years, renewable. Imagine the extra revenue for your province!

As of April 2019, ownership of the 407 ETR Concession Company Limited (“407 ETR”), the operator/manager of the highway, is as follows:

SNC sold its shares to CPPIB – wiki is out of date.

You can’t beat the reliability of the diesel/gas/ICE engine.

Toronto Hydro is reporting a major outage in Toronto’s east end Monday morning. The outage began around 6 a.m., impacting a large area with rough boundaries from Eglinton Ave. E. to Lakeshore Blvd., and between Yonge St. and Victoria Park Ave. The hydro distribution company, serving 756,000 customers total according to their website, says the issue is a result of a lost power supply from Hydro One.

I’ve been writing this for the last 25 years. Boy time flies – and nothing changes! 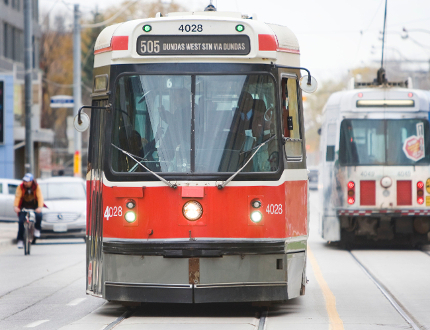 It’s amusing to hear that, as the city prepares to launch a pilot project on King St. to give cars the lowest priority compared to streetcars and pedestrians, there is no “war on the car” in Toronto.

Source: Toronto needs a war on the streetcar

Wonderful writer with some wonderful tales.

I was built to play Santa Claus, from my pot belly, beard and pipe to my love of everything about Christmas.